You can run this tutorial on:

ROS allows you to run nodes on a single robot and on dozens robots as well, as long, as your devices are in the same network.

You will learn here how to configure ROS to work on multiple computers. You will use this configuration to set up system consisting of robot and computer or two computers (gazebo version), which perform task of searching an object.

In this tutorial you will need a computer and a robot with the same equipment as in the previous tutorials.

In case you are working on Gazebo simulator, it is possible to setup system to work on multiple computers. To do so, you need to have two computers with ROS.

To run ROS on multiple machines you need to connect them to the same LAN network at first.

Remember that only one devices can run ROS Master. For example if you are connecting robot and laptop, run roscore only on one of those two devices.

While working on multiple machines, you need only one roscore running. Let's assume we are connecting robot and laptop devices, with the following IP addresses:

The steps are as follows:

On the robot device open the .bashrc file, then find lines:

and replace them with:

On the laptop device open the .bashrc file, then find lines:

and replace them with:

If you do changes in .bashrc file always source it with . ~/.bashrc or reopen terminal

Remember that roscore must be running on the device indicated as ROS master!!!

As mentioned in the previous section you can run ROS nodes even of dozens of devices as long as they are in the same LAN network. That means you can run a single ROS system containing your laptop and robot connected to the same Wi-Fi router, but you can't if robot is connected over LTE.

You can solve the issue by using a VPN service. Standard VPNs, however, are designed for other purposes than mobile robotics, and are introducting some drawbacks to your system, like:

Fortunately there is a VPN service designed with ROS in mind - Husarnet VPN Client. Husarnet is an open source peer-to-peer VPN - that means you can connect your robots directly over the Internet, with no central VPN server for data exchange. All traffic is encrypted using ephemeral keys, and it works with ROS out of the box. Just install Husarnet Client on your laptop and robot, connect them to the same Husarnet network, by using an online dashboard and enjoy low-latency connection between your devices :) 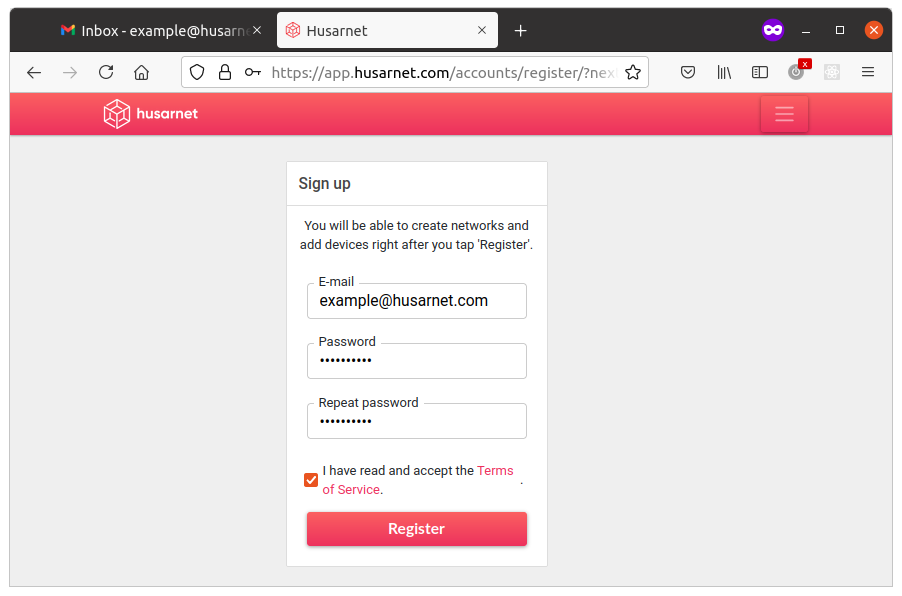 Please click the confirmation link in the e-mail you should have just received: 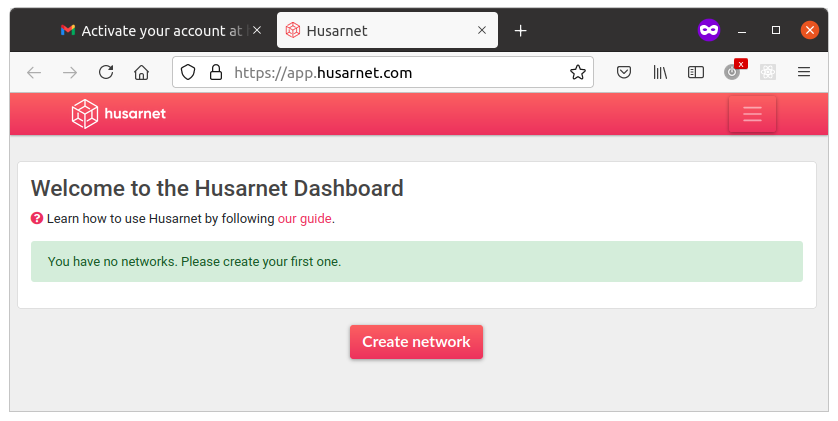 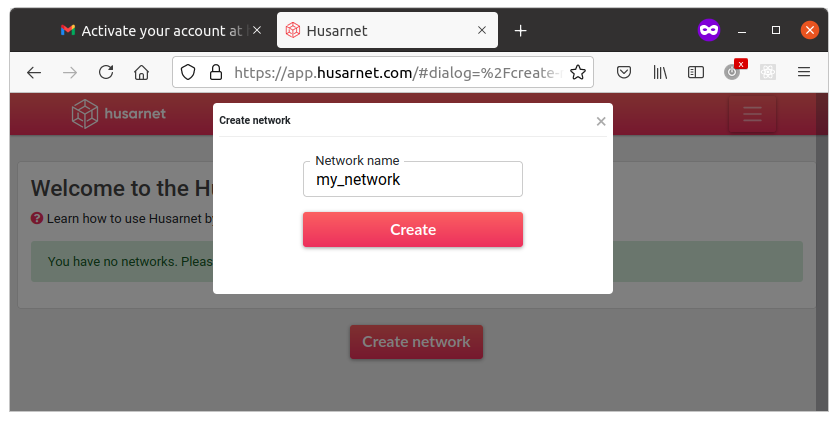 After you create a new network you will see: 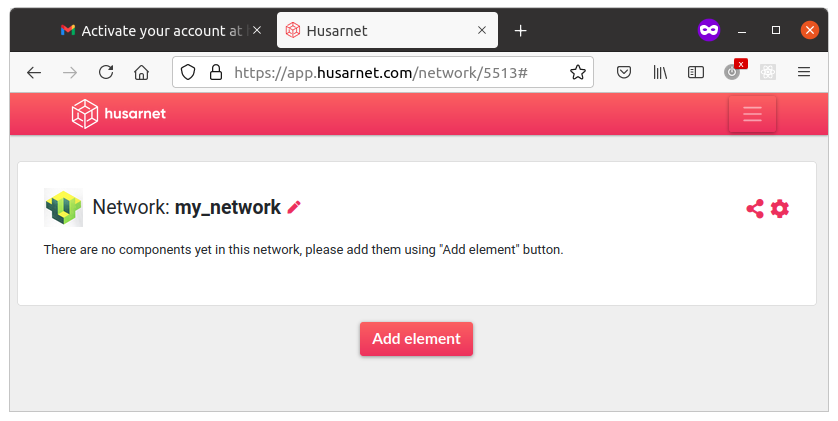 Click [Add element] button and you will see a window with your Join Code:

Finally, install the Husarnet Client on your devices and add them to your Husarnet network, by simply executing in the Linux terminal 3 commands:

To the same on you laptop (sudo husarnet join ${JOINCODE} my-laptop) and that's all. Now we can reach all the devices like they were connected to the same Wi-Fi hotspot, even if they sit in different continents.

The steps to configure ROS are as follows:

On the robot and laptop devices open the .bashrc file, and make the following configuration:

In online dashboard make sure to select ROS master checkbox in setting of my-robot device. It will allow you to reach my-robot device by using both my-robot and master hostname (the second one is used in our configuration) 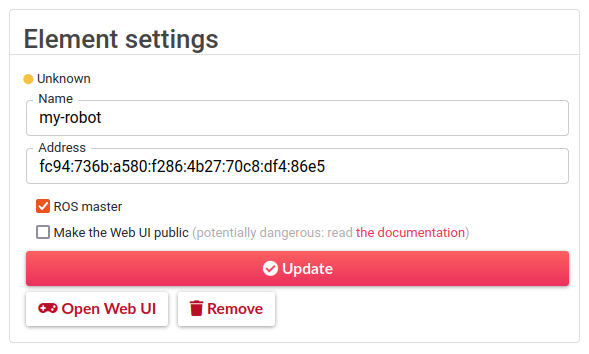 As you can see it's even easier than in previous configuration (only LAN network), becasue you don't need to know IP addresses of devices, but only an easy to rembember hostname master.

Husarnet is open source and free to use up to 5 devices. It works not only with ROS, but also with ROS 2, and here you can find a nice article showing how to integrate it with your ROS 2 system:

OK, at this stage you should have your laptop and robot connected over LAN or over the Internet. Let's launch some demo nodes to see how the connection works in practise.

A cheatsheet how to run the following ROS nodes / launch files:

Running on a Physical Robot & a Laptop​

Running on two laptops (one with Gazebo simulation)​

In this section we will program robot and computer to outsource robot computing power. The node we are going to outsource from a robot is responsible for image processing. So basically a robot publishes camera stream and object recognition is on laptop (using find_object_2d node).

Such a use case could be a common task - especially if we need to use computer's graphics - probably much more powerful than that in a robot.

We will follow the pattern form a previous tutorial but this time we do it using two machines (ROSbot and laptop). Anything could be an object to recognize, but remember, that the more edges and contrast colours it has, the easier it will be recognized. A piece of paper with something drawn on it would be enough for this tutorial.

Image transport node provides compressed image delivery from one device to another, on sending machine you have to run this node for compression and on receiving machine you have to decompress images. Before we used image view without any compression which is enough just for see if it's working, but if only you want to implement some real time image processing it's necessary to compress an image.

Create launch file under tutorial_pkg/launch and name it as tutorial_5_rosbot.launch:

And launch file for PC computer, name it `tutorial_5_pc.launch:

Use rqt_graph to see how the system is working now.

That's all you don't have to worry about nothing more than properly configuration of .bashrc rest stays the same. If you have more than 2 devices the pattern is the same. ROS takes care of all data exchange. That is really simple, isn't it?

Gazebo node will be running on one computer (let's name it "gazebo computer"). Second machine - name it laptop - will be responsible for image processing.

At "gazebo computer" use the following launch file and save it as tutorial_5_gazebo_1.launch:

On laptop use this launch file and save it as tutorial_5_gazebo_2.launch:

Execute both launch files, open rqt_graph to see how the system is working now.

After completing this tutorial you should be able to configure your CORE2 devices to work together and exchange data with each other. You should also know how to program robots for performing tasks in cooperation.