Mbed OS is free, open-source platform and embedded operating system designed for IoT devices based on Arm Cortex-M family of microcontrollers. It is developed as collaborative project by Arm, its partners and growing community of individual devs from across the world. Mbed OS is distributed under the Apache-2.0 License and it's available on project's GitHub page.

Besides support for variety of boards from different manufacturers the framework has features like:

In this tutorial we will show you how to build, compile and run mbed applications on CORE2 using mbed offline tools. You will be introduced to basics of mbed API, learn how to use rosserial library to connect your mbed application with SBC and more. Let's hack! Before we start make sure you have following tools installed on your system:

Everything up and ready? Proceed to the next steps then.

mbed-cli is a package name of Arm Mbed CLI, a command-line tool that enables use of Mbed build system, GIT/Mercurial-based version control, dependencies management and more. Check Mbed CLI GitHub page or Mbed documentation for details about the tool.

To install mbed-cli follow this tutorial from the Mbed documentation.

Installers for both Windows and macOS are provided. Linux users have to install tool manually. In case you are user of the latter system check if you have both Git and Mercurial installed before you start. See Instructions for Linux page for more details.

Check if the installation was successful by running following command in the terminal:

After installation you have to inform Mbed CLI about location of compiler (in our case GCC Arm Embedded Compiler) binaries. We will use global setting. Run:

You can check current configuration by running:

Create a new folder core2-mbed-workspace. It will serve as a workspace for your mbed projects. Run:

Next step is to import mbed-os library. It will be used by all your projects. In your workspace's folder run:

Set Mbed OS version to supported by this template:

During Mbed OS installation you can be asked to install additional python libraries. Switch to mbed-os dir and run:

In order to add support for CORE2 target and speed-up building of your projects we will exclude certain folders of mbed-os library from compilation. For this purpose Mbed build system provides .mbedignore files. They have similar structure to .gitignore files used by GIT.

In your local mbed-os library directory create a new file and name it .mbedignore. Open it and add following lines:

We will start by setting up a template project. You can use it as starting point for all of your mbed applications.

Just download the zip : https://github.com/husarion/core2-mbed-template/archive/master.zip and extract it in your workspace.

You can also clone the repository using GIT:

Open the template project in Visual Studio Code. In file setting.json from the directory .vscode in your template, change the value of C_cpp.default.compilerPath to match location of arm-none-eabi-gcc on your system:

The paths may differ on your system.

This will enable more accurate IntelliSense and remove some error notifications.

Open the template project's directory and select src/main.cpp. You should see: 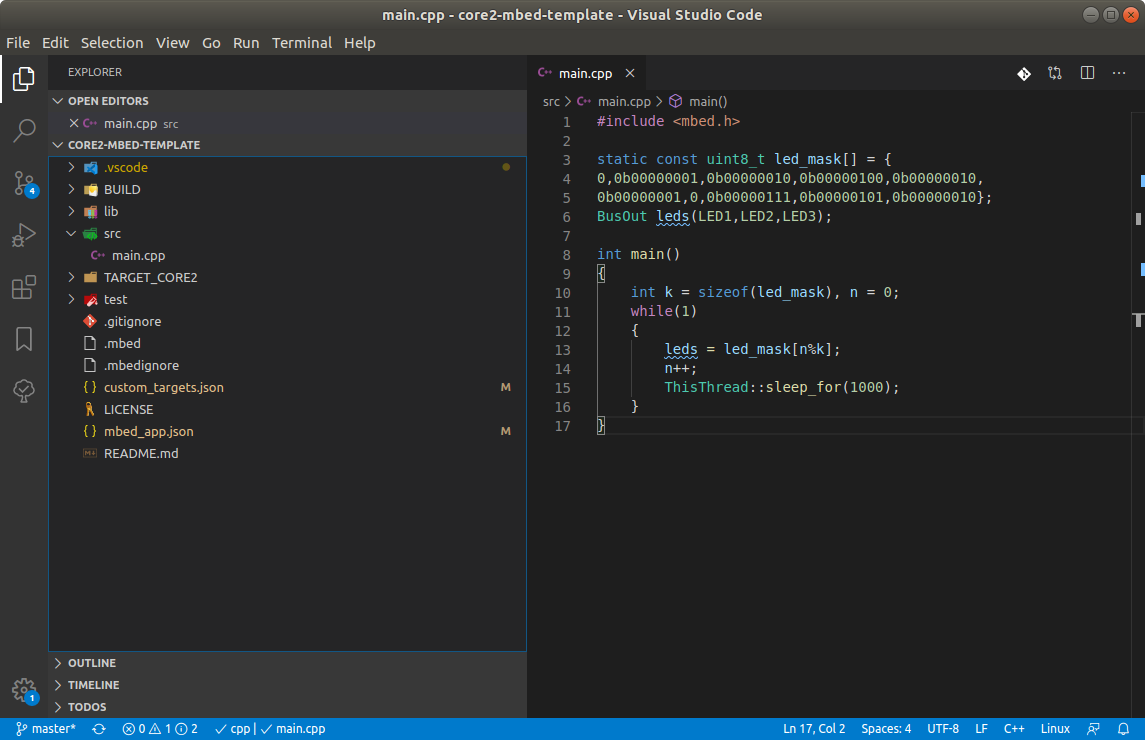 The sample code is very simple. It instantiates a BusOut object that controls multiple GPIOs regardless of ports they belong to. On-board LEDs blink in order described by leds_mask array at the interval introduced by function ThisThread::sleep_for(1000). 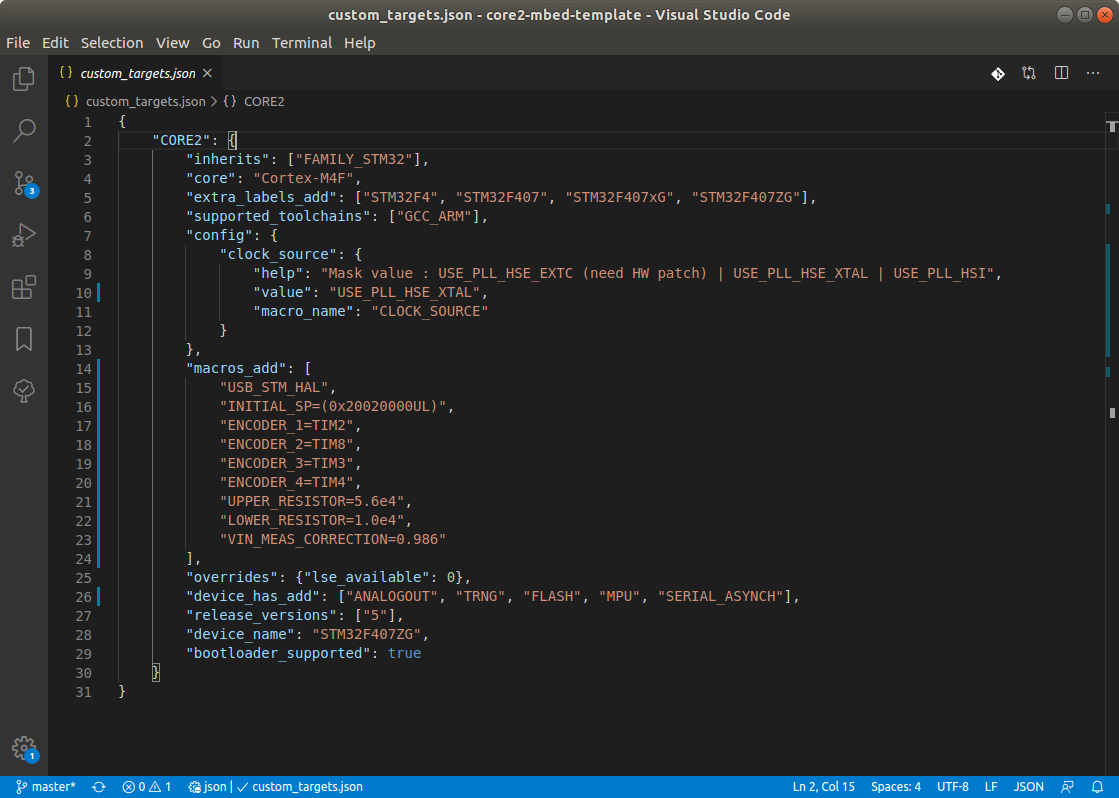 Mbed OS Configuration system uses this file to describe user's custom boards. It allows using Mbed OS with boards that aren't officially supported. We use custom_targets.json and files from TARGET_CORE2 to define CORE2 target. You can learn more about configuration system here.

In the directory TARGET_CORE2 you can find files PinNames.h and PeripheralPins.c. First one defines pin names of mcu and the latter defines peripherals that can be used on each pin.

Another file that is used by Mbed OS configuration system is mbed_app.json. Open it. 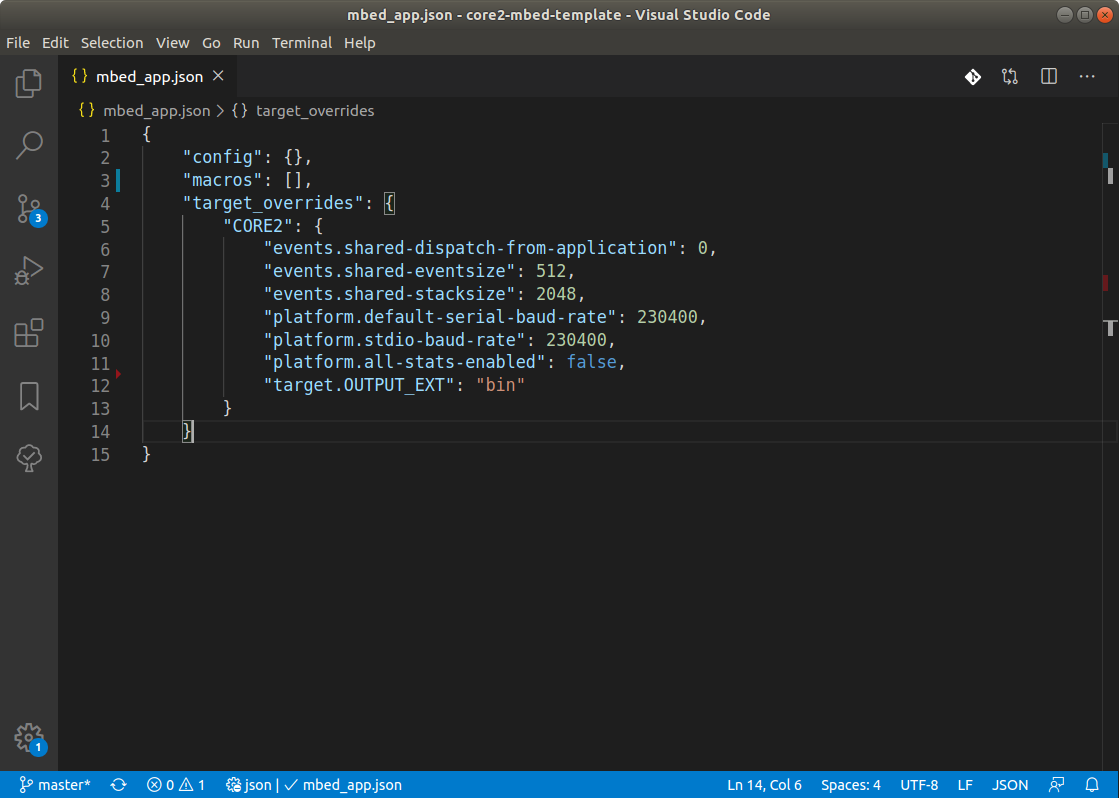 This file is used to configure your application. It allows to override the default configuration of mbed libraries (or your own) for specific targets (tag "target_overrides"). You can also define your own macros that will have global visibility (tag "macros") and create configuration entries (tag "config").

You can also chosee here format of output file. If you want to use stm32loader and program your CORE2 straight from SBC you should leave:

But if you want to use core2_flasher and USB cable you should change it to:

You can learn details of your configuration by running following command in the root directory of the template project:

The last file we will check is task.json from .vscode directory. It defines tasks that are recognized by Visual Studio Code IDE. The tasks can be accessed by pressing CTRL + SHIFT + P and typing Task: Run Task in Command Pallete. 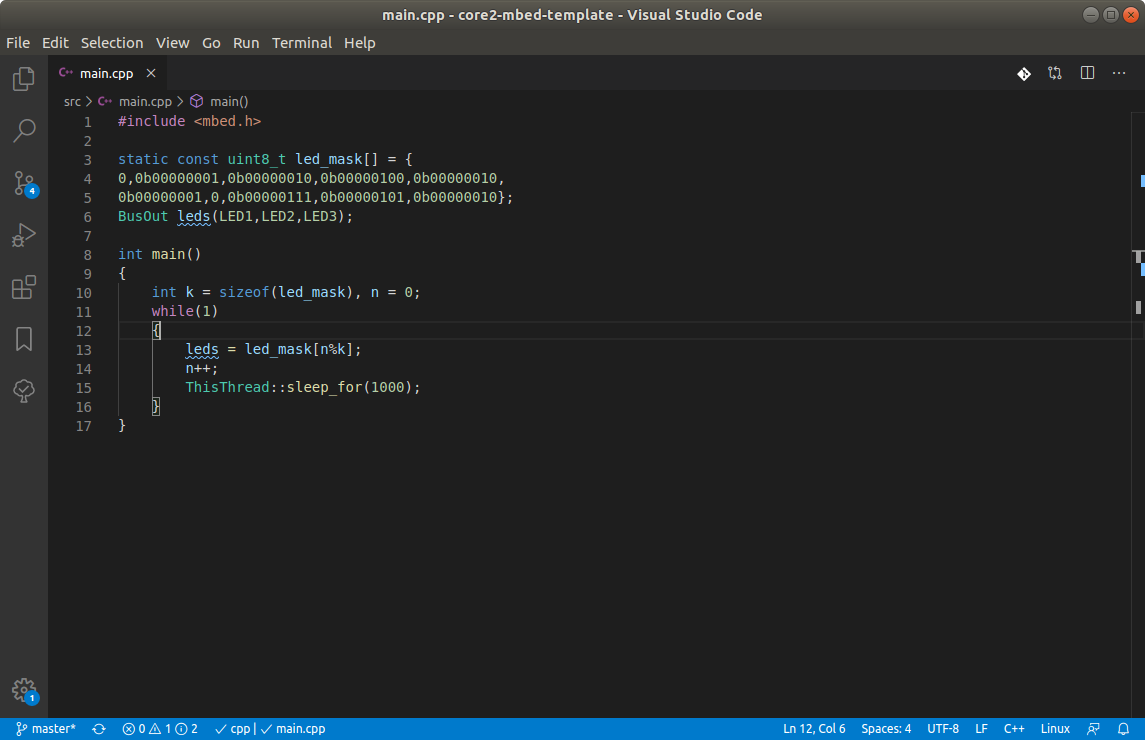 Important! If it's your first time with Mbed OS on CORE2 and you have been using Husarion Cloud until now you will need to do one more thing before proceeding. The Husarion Cloud used small program that resided in flash memory before main application called bootloader. This memory area is write protected so you have to use core2-flasher tool to unprotect it: ./core2-flasher --unprotect 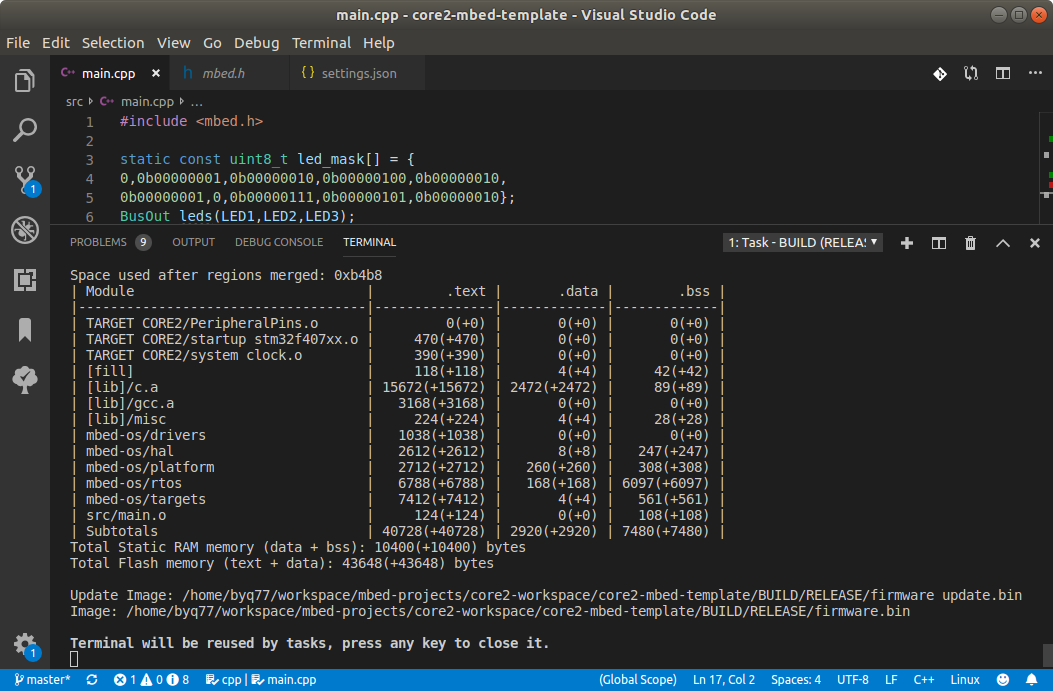 Here we have two option of flashing firmawre to CORE2.

This method was explained in tutorial CORE2 - quick start so if you don't know it yet please check this tutorial.

Note! The hSerial port on rear panel of ROSbot is the same port as hSerial on CORE2 visible in the illustration.

This method is only for CORE2 with SBC connected to hRPi connector (CORE2-ROS or ROSbot's). You don't have to use any additional cables because it's using UART from hRPi connector.

Open console of your SBC. Go to the directory including your .bin file. Next type:

You have to replace <your_sbc> with rpi, tinker or upboard.

Full documentation of STM32loader you can find in our Software section.

If LEDs start blinking like on the animation below then congratulations! You've just successfully built and flashed your first Mbed application for CORE2!

If you made it this far you must be really into this stuff! Let's do something more interesting and learn how to communicate with devices running ROS using mbed. For this purpose we will use rosserial for mbed platforms.

After that copy content of template project except .git directory to your newly created program directory.

If you cloned your template project from online repository and you don't want to have version control in it just delete .git directory:

You can add it latter by running git init . in root dir of your project.

Open example-publisher directory in Visual Studio Code. In the program press CTRL + ~ to open built-in terminal. In the terminal type:

This will add rosserial-mbed library to your project and download all library's dependencies. Managing libraries this way is simple: 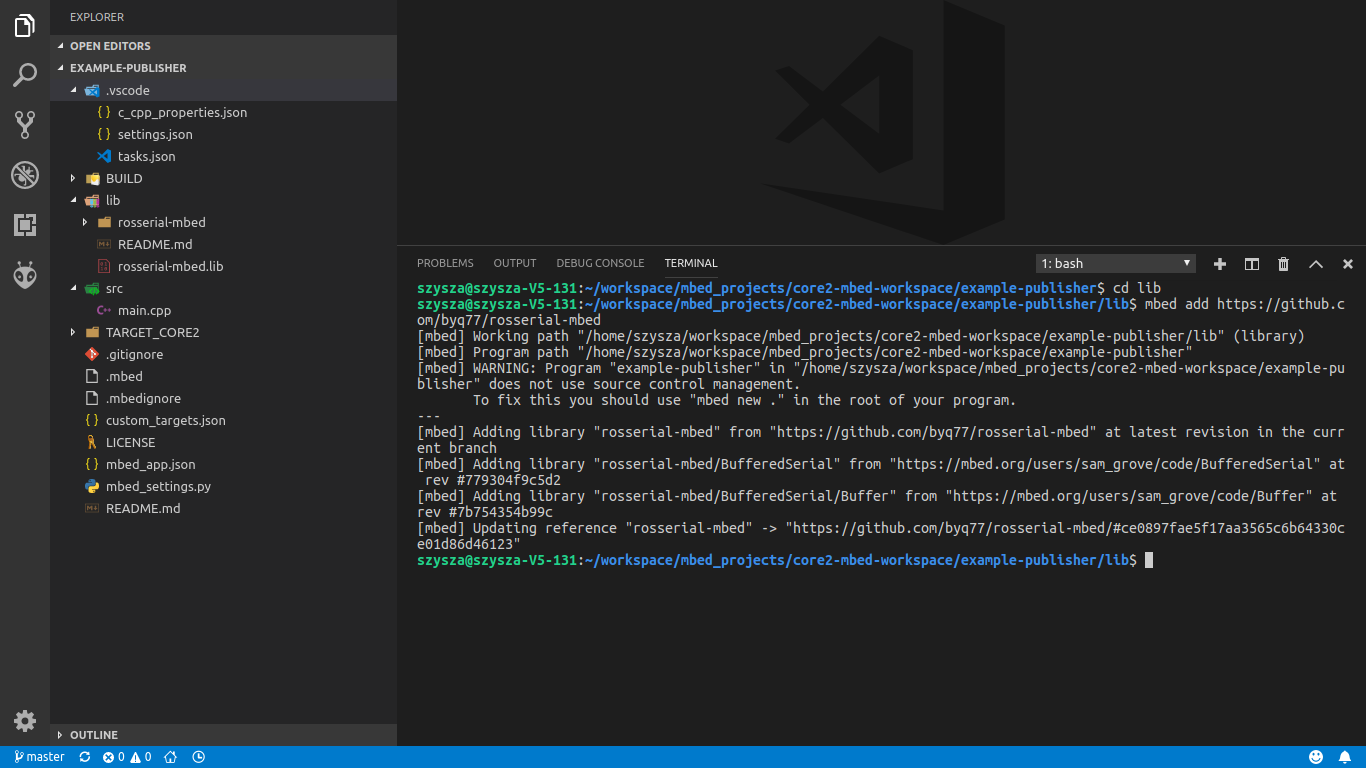 Take a minute to analyze the program below. We provided you with comments to make it easier.

As you can see the program is pretty straightforward. It creates topic "device_mbed" and publishes messages to it blinking board's leds at the same time.

If you would like to know more about mbed specific code check Mbed API :

To get the application working we need to configure library's serial pins and baudrate. You can check default values in rosserial-lib/mbed_lib.json. If you use CORE2 with SBC connected to RPI connector, add this lines to your mbed_app.json file under target_overrides.CORE2 object:

Now you can compile the project and flash it to your board. To view communication on your SBC you must disable Husarion Cloud.

This will forward your MBED messages to rest of ROS. 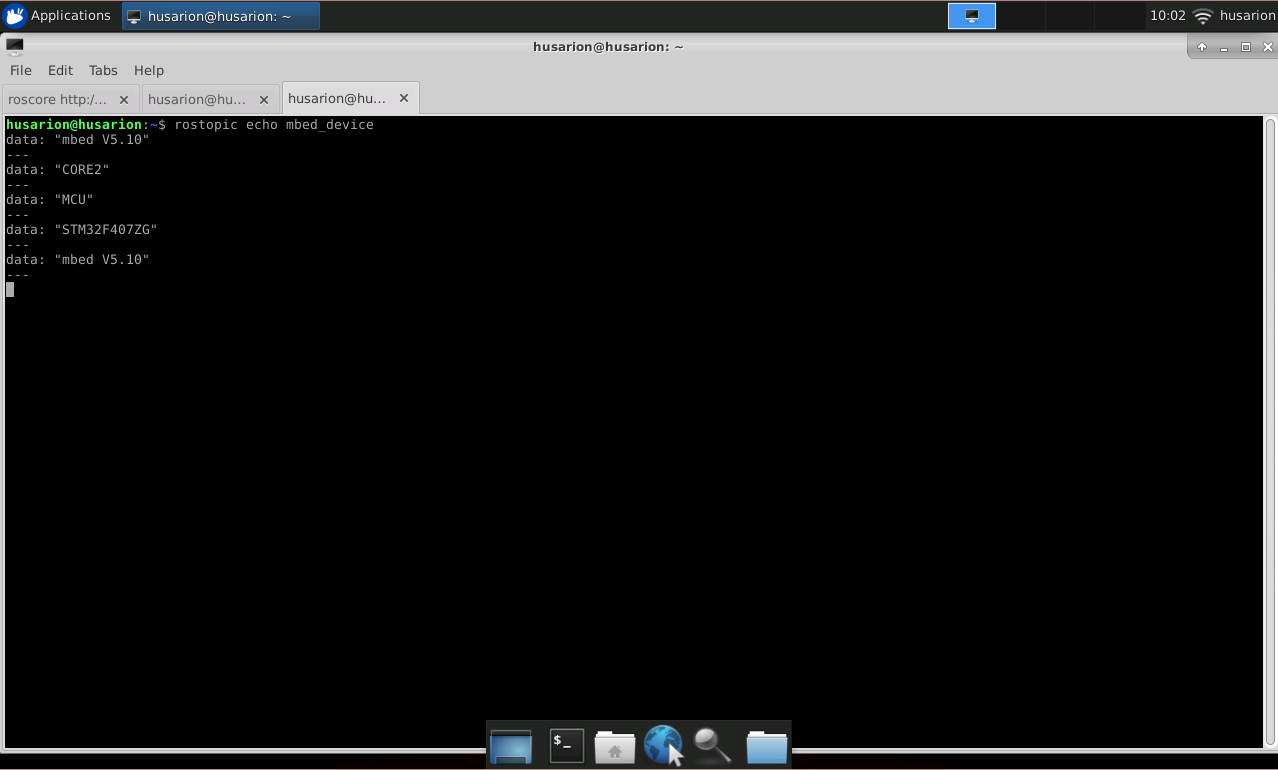 In this project we'll use both publisher and subscriber as well as some cryptographic functionality of mbed TLS library . Mbed TLS library include crypto and SSL/TLS capabilities with minimal footprint and easy to use API. It is available as part of Mbed OS.

Like in previous example create a new project and name it subscriber-example.

On your SBC open a terminal and in separate tabs start roscore and rosrun rosserial_python serial_node.py bridge with the same parameters like in the previous example.

To receive encrypted messages, in a new tab run:

To publish new message to "input_raw" topic open a new tab and run: 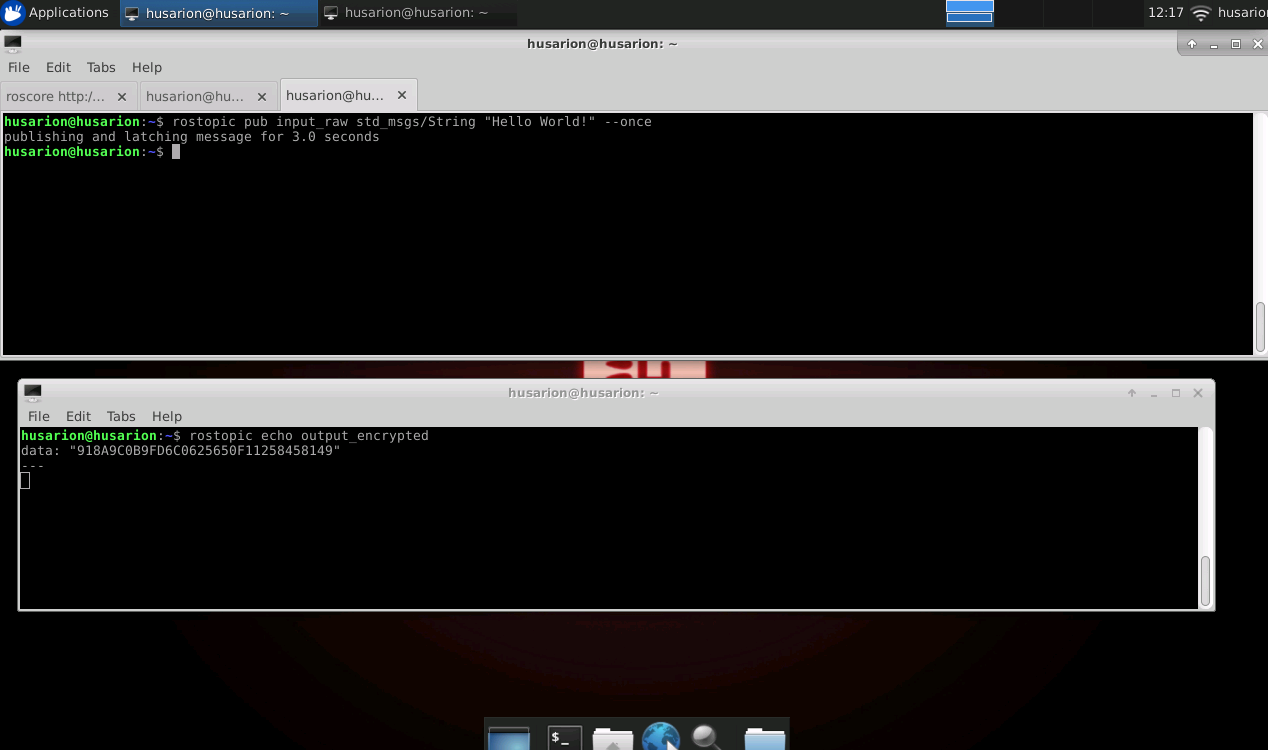 If you want to learn more - check official rosserial mbed tutorials from ros.org.

After completing this tutorial you should know the basics of Mbed OS components and tools. You should be able to create, compile and run mbed applications on CORE2 and use Rosserial library to incorporate your mbed platform into ROS projects.