The robot is equipped with an Emergency Management Unit (EMU). It is a system that takes control of the robot's components as well as its power in crisis situations. It is indispensable in cases when work is carried out on the software of the device and therefore it is not yet stable enough. The EMU can stop the robot's movement, turn off the power of the user's device, or even turn off the entire robot, if so configured. Switches placed on PCB inside the robot allows you to adjust the robot's behavior to meet the relevant requirements. EMU provides also dedicated electrical User Safety Interface (USI) led out to the User Space.

Please take this document seriously. Inadequate and irresponsible setting of the unit may cause damage to the device, the workplace and people in the vicinity.

The EMU consists of a series of inputs (Triggers and Resetters), several outputs (Actions), a latch coupled to the reset circuit and switches for configuration. In the document below you will find a simplified structure, description of operation and instructions on how to proceed in specific situations. The default setting of the switches can be found in the chapter DIP switches at a glance

E-stop signal and the latch​

The EMU operation due to the appearance of the appropriate trigger, we are calling the activation and latching of E-stop singal - the most important signal for this unit. The configuration of the unit allows for some changes in the way this signal is activated, the effects it brings and the method of resetting the latch of this signal.

The simplified operation of the unit is presented in the diagram below. The individual segments of the scheme are discussed later. 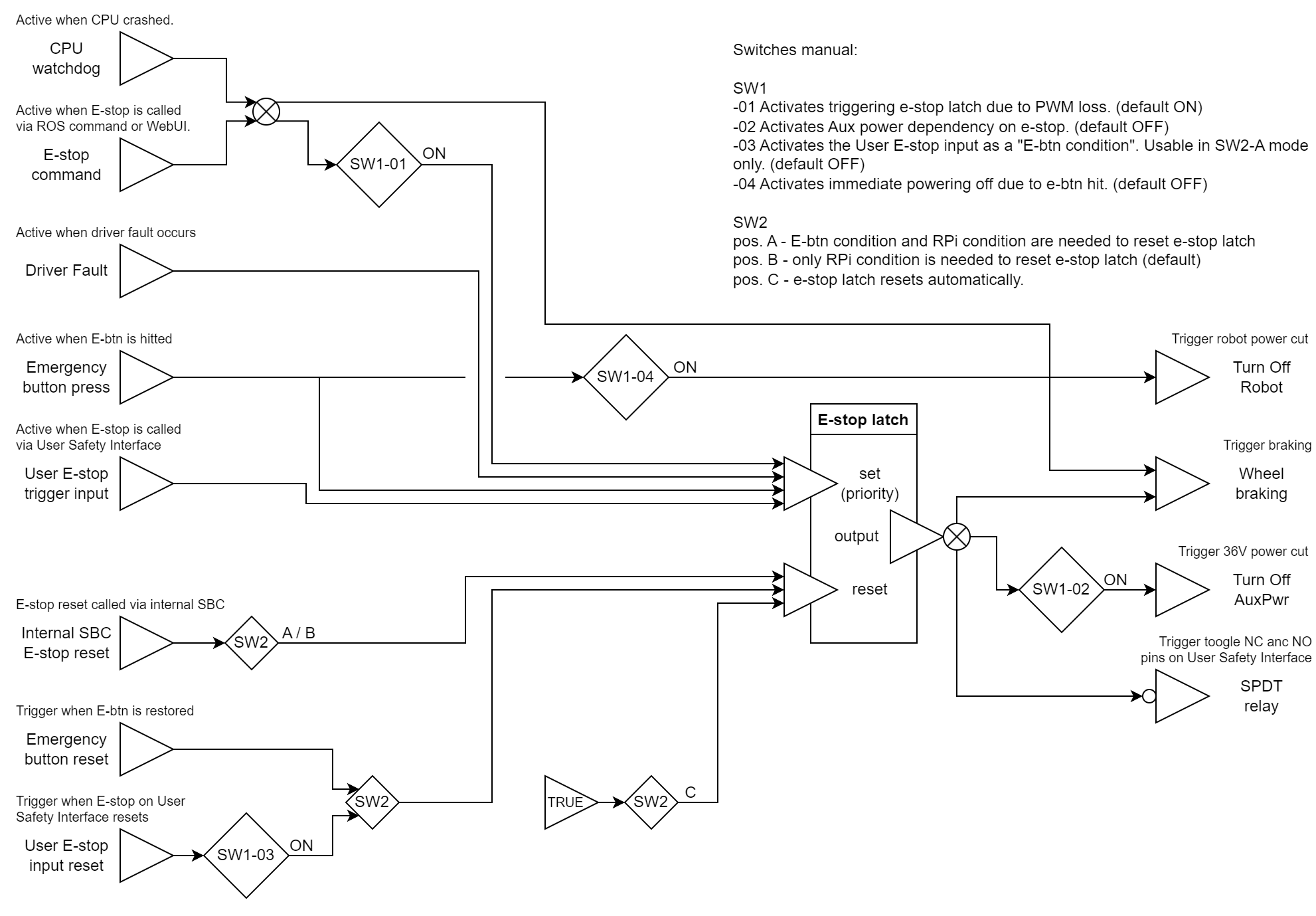 The internal computer that transmits commands and information between the motors controllers and the rest of the system, constantly communicates with the EMU as well. When this communication is interrupted, the EMU will take some actions.

The process responsible for communicating with the EMU may stop broadcasting on request. Then the EMU will behave according to the selected settings of the switches S02 and S03, the same as in the case of a system hang.

The BLDC motor controllers in the robot are high-power devices that have an extensive operation management system. The controller can be programmed to detect sudden spikes in torque, fluctuating control signal, limit current etc. and send an error signal that will be read by the EMU which will cause activation and latching of the E-stop signal. This operation of the EMU can be disabled with switch S01.

The EMU is also able to detect when the Emergency button (E-btn) on the robot is pressed. In this case, the E-stop signal will be activated immediately and will be latched. Additionally, another action can be performed, which is immediate power off of the robot, if switch S07 is turned on. This functionality is sometimes required, but it also has undesirable effects. Remember you will no longer have control of the robot that loses its power completely before restarting it.

The connector inside the robot can be used to trigger and latch the E-stop signal. For this purpose, voltage in the range from 3V to 12V should be applied to the appropriate terminals.

There are two steps to deactivate the E-stop signal described below. The order does matter. Both conditions can be modified with switches S04, S05 and S06.

The first condition necessary to turn off the latched E-stop signal is to reset the Emergency button (E-btn) on the robot. If the E-stop was triggered in another way than with E-btn, and E-btn is already reset, press it and reset it again.

The signal is sent to the EMU from the internal computer only on request. It is the second of two conditions to disable a latched E-stop signal. Its function can be disabled with switch S04.

If the attempt to reset the latch by internal computer fails, e.g. due to the E-stop trigger signal presence or failure to meet the first condition, the computer will inform about it with an appropriate message depending on the attempt channel (SSH or WebUI terminal).

Only triggered by pressing the Emergency button on the robot. Function activated with switch S07. If you want to use this function on your robot, please consider turning on S06 or turning off S05 to allow the latch to be reset by other means.

By activating the E-stop signal, the motors will brake the robot.

The connector inside the robot also contains the relay outputs with the Operating Open and Operating Close terminals, where the Operating state is defined when the robot is working properly. Turning off the robot or activating the E-stop signal in the robot switches the relay and closes the NO terminal and opens the NC connector. The maximum rating for these terminals is 1A @ 24V DC / 0.5A @ 125V AC.

The following part describes the settings to suit the preferences of people working with the robot.

To access the EMU configuration switches remove the rear deck. Read more how to. 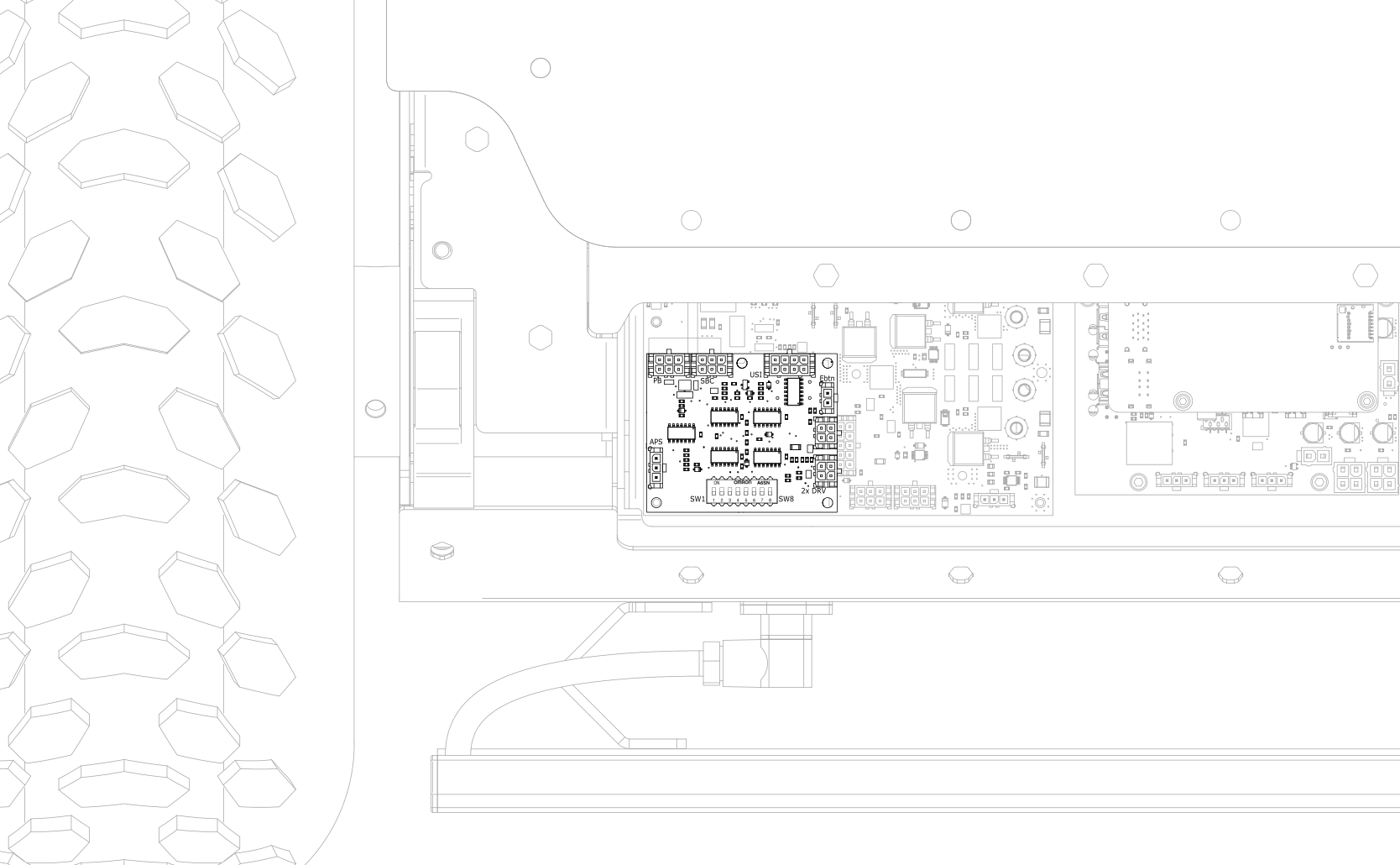 On the left side of uncovered space is placed the Safety Board with one eight-channel DIP switch. 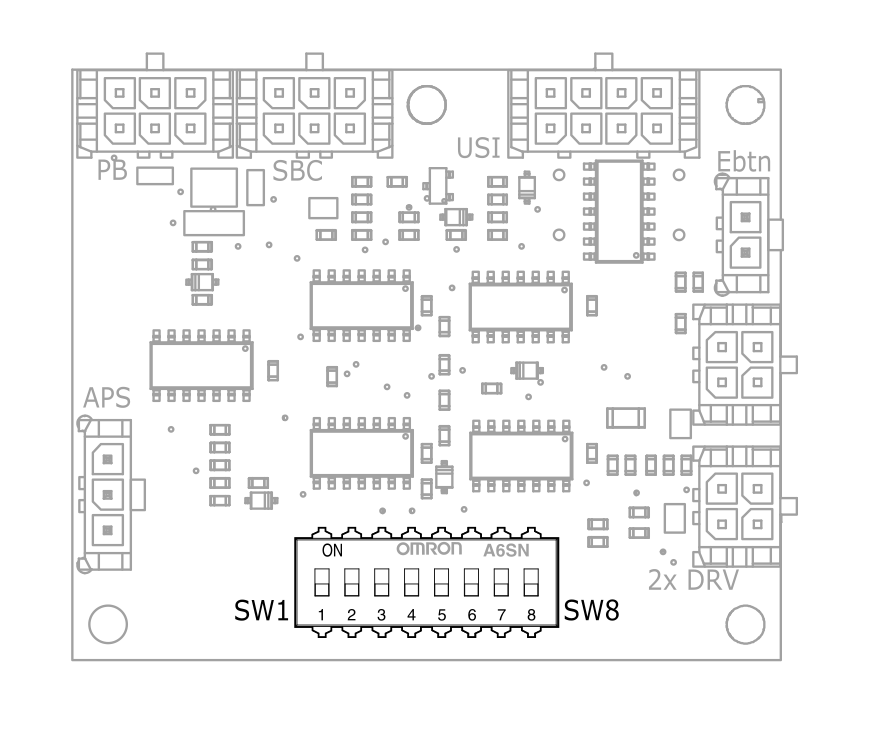 DIP switches at a glance​

The SP1312/P9 socket, accessible from the user space side, is an electrical interface for EMU.

The schematic diagram of the electrical connection is presented in the graphic below. 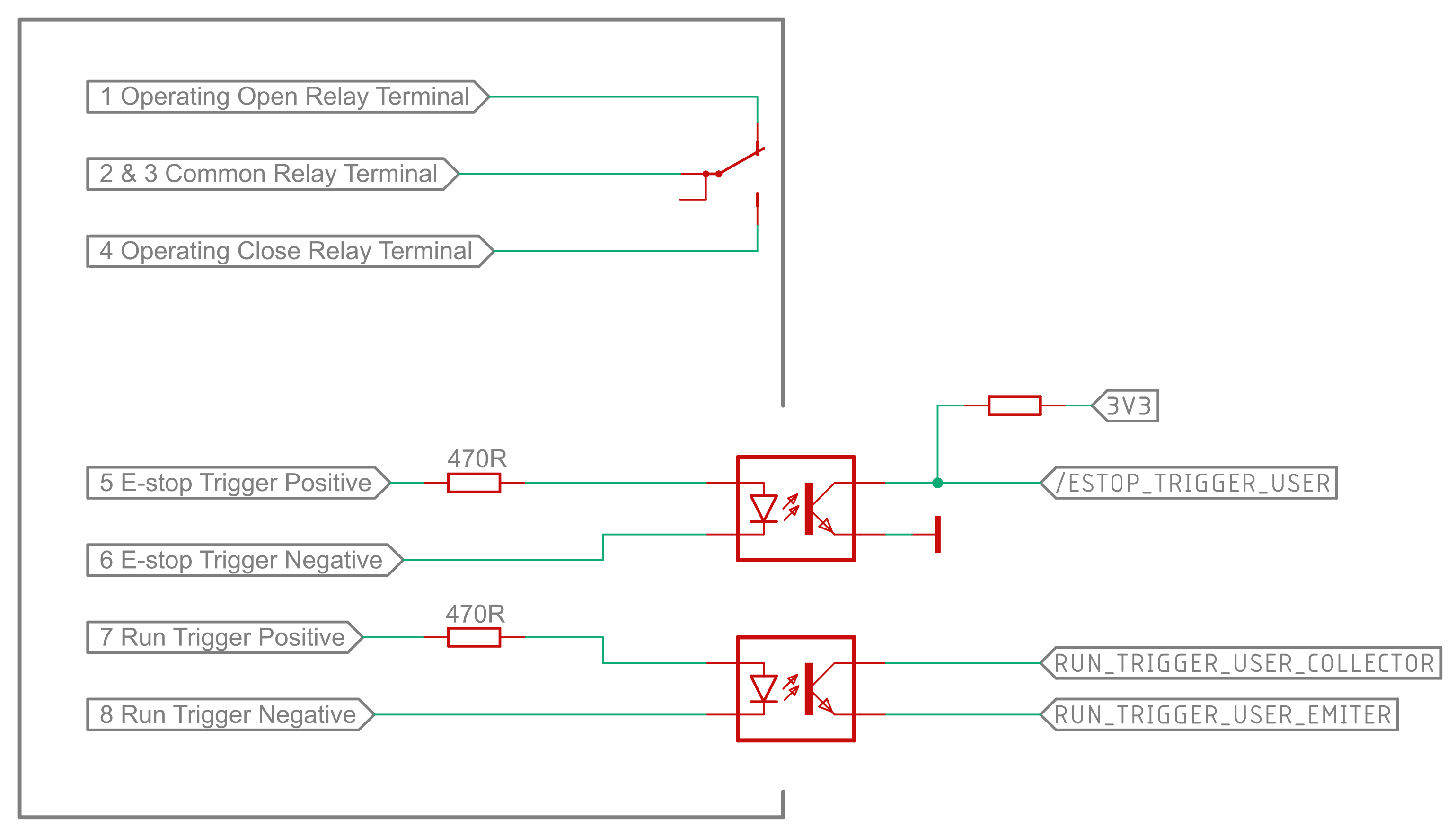 Hardware input triggered by applying a voltage in the range of 3V to 12V to terminals 5 (+) and 6 (-) of the USI connector. It activates and latch the E-stop state on the robot.

The EMU is equipped with a mechanical contactor that changes its outputs depending on the E-stop state of the robot.

A table below describes states of the outputs depending on the state of the robot.